Sometimes, when I ask my partner if there’s anything he fancies for dinner, I get the simple, concise, and yet fascinatingly unhelpful response “Pie!” 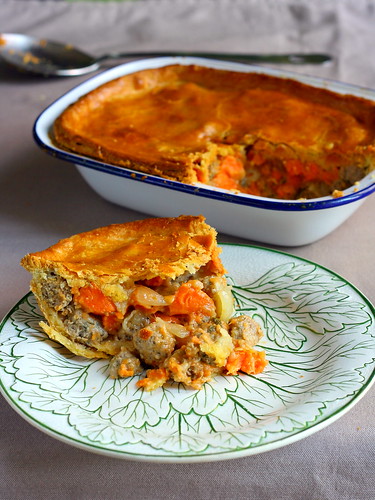 Fair play to the man, pie is bloody wonderful. But it does often lead to me just taking whatever’s in the fridge and hiding it under pastry.

This one comes out of something I knocked up quickly after work one evening, and with a couple of tweaks it was a keeper.

The Lincolnshire sausages have a bit of background spice to them, and with a little extra herb and pepper they go wonderfully with the sweet potatoes.

If you don’t make the pastry, you can have this done in about an hour, too, and at least half of that is oven time.

END_OF_DOCUMENT_TOKEN_TO_BE_REPLACED

…and with apologies to most of Germany, and a chunk of the British armed forces. Probably bits of France and India, too. In fact, this one might be worse than that time I ate a black pudding and cheese bagel.

Look, currywurst isn’t sophisticated. It never has been, and given you can now buy it from a little electric contraption balanced on a burly German’s crotch, it ain’t getting any better.

It is – however – getting wrapped in pastry:

Cuyrrywurst is iconic-teutonic street food of the dirtiest, most delicious stripe, and I grew up wolfing it down the way my dad made it. Which was the way he made it during a stint as an army chef. Which was with a thickened curry gravy, rather than the more traditional spiced ketchup.

END_OF_DOCUMENT_TOKEN_TO_BE_REPLACED

Yeah. So, with food as with a lot of things, I’m a bit of a fan of anything that gently subverts the form. Crash that into the fact that it is actually Christmas time, and “proper” mince pies were basically inevitable. It’s like my grandmother always used to say: “You just can’t get too much postmodernism in your dinner.”

Actually, she’d probably have hated postmodernism on principle, in suspicion that it seemed a bit French. But I’m straying from the point.

If we’re going to believe Wikipedia, Mince pies actually started out a bit like this – a meat pie with fruit, spices, and middle eastern influences. Spoilers: the Victorians ruined it.

END_OF_DOCUMENT_TOKEN_TO_BE_REPLACED

This recipe is the eventual outcome of an experiment that started with quite fancying chachouka, but having both some lamb to use, and a boyfriend whose fondness for pie borders on the obsessional. I usually make the chachouka from the River Cottage Veg book, (someone’s replicated the recipe here) but after all the tinkering, this has basically nothing in common with it. It’s definitely a pie, though. Look, you can see the pastry.

In fact, we get from there to here via the Braised eggs with lamb, tahini, and sumac recipe in Ottolenghi’s Jerusalem, liberally crashed into spanakopita. The first iteration worked in pure flavour terms, but the textures were a wash out. So after a bit of work, this is what we end up with.

Fair warning: it is a bit of a faff

END_OF_DOCUMENT_TOKEN_TO_BE_REPLACED

It’s the tail-end of Veguary – my annual flirtation with temporary vegetarianism – and I’ve not written much about the food that’s been involved. This is in no small part because my freezer is full of vegetable curry, and I’ve spent a frankly unreasonable amount of time trying to perfect a vegetable moussaka that doesn’t rely on lentils for bulk and body. More on that later, but if you’ve got any suggestions that take less then two hours, I’m listening.

These little puff pastry radicchio parcels are one of the successes from Veguary 2014, and pull off that neat trick of being quite impressive for almost no effort. Although the bitterness of the radicchio itself isn’t for all palates.

This is heavily adapted from Silver Spoon’s Radicchio en Croûte recipe (p.553). For that, you basically just grill small radicchio whole, and bake them in pastry with salt and pepper. It’s tasty if a little plain, and works best with very small heads of radicchio. If you’ve only got the large ones, you’re best slicing them in half.

END_OF_DOCUMENT_TOKEN_TO_BE_REPLACED

My friend Dave handed me some last week, with the instruction that although it makes a sensational tapas-ish snack, I’d be doing myself a disservice not to make it into an Alsace tart. He also recommends frying it with broad beans and garlic, which I will be doing at the next available opportunity.

In the end, this was more like a light quiche lorraine, but bloody hell it was good.

END_OF_DOCUMENT_TOKEN_TO_BE_REPLACED

A pun is not the best place to start when constructing a recipe. But once I’d had the idea for “tarte aux pommes(de terre)” I couldn’t get it out of my head until I’d made it. The first iteration looked the part – all prettily layered – but didn’t really work as a dish. There was something there, though, and the presentation was too good to let slide; so I did it again, and hit on something that works rather well.

Version one was a basic spinach tart with a potato hat on. There was dill in the mix, aping a spanakopita. But without the feta (I was cooking for my boyfriend, and he’s  lactose intolerant) it just doesn’t cohere. Cheese, though, cheese – that’s the key.

END_OF_DOCUMENT_TOKEN_TO_BE_REPLACED

Swiss chard may not be especially Swiss, nor is it to everyone’s tastes. But it does go really well with cheese, and since I had some decidedly Swiss raclette left over – and it’s very much to mine – this seemed like a good idea.

Chard has a robust leafy, earthy flavour with a stalky edge some don’t like. This is, of course, more pronounced in the stems. The leaves will wilt down like a stronger, more lettuce-ish spinach. Although they’re tougher and a little waxier.

What that in mind, a variation on an old favourite springs to mind – the rocket and taleggio pie from the indispensable Silver Spoon.

END_OF_DOCUMENT_TOKEN_TO_BE_REPLACED

The Delicious Magazine website has a neat looking recipe for a Limoges style potato pie. The basis of it is simple enough – a flat, crimped, two sheet pastry affair of layered potatoes with herbs and shallots. But what got my attention was the liquid filling. A kind of savoury herb custard is poured into the pie midway through cooking. Egg yolks, beaten into warmed cream, go in through a hole in the top crust.

I assume this sets partially through the cooking time but remains a little most, adding a light gravy to a pie that could otherwise be a little dry. A quick Google hasn’t yielded much insight into this particular technique, but the pie sounded splendid, and I thought I’d give it a go.

Of course, I couldn’t help but tinker. My partner suggested “something with potatoes and leeks” for dinner, I’m mildly obsessed with chorizo, and I straight-up forgot the liquid filling was meant to go in part way through. So this is not the Delicious Magazine Limoges-style potato pie. It’s a kind of confused spicy homage.

I’ll re-do the Limoges pie properly in the week.

END_OF_DOCUMENT_TOKEN_TO_BE_REPLACED

When I was growing up, we had a phrase, an often-repeated piece of kitchen folk wisdom as trite and fundamentally meaningless as any other: we eat all our disasters.

What can I say? It’s nicer than “shut up and eat it, because there isn’t anything else” – the solidarity of gallows humour for burnt stews and sunken cakes. I’m yet to hear any piece of folk wisdom or street smarts that didn’t reduce either to meaning nothing or just being a memorably pithy example of a logical fallacy. But this one has stuck somehow.

We eat all our disasters. My mother said it a lot, jokingly in the main, as she very rarely miscalculated in the kitchen. She would probably have known better than to attempt yesterday’s lunch.

All of which is a floridly round-about way of saying that I fucked this up but ate it anyway.

It’s a pseudo-quiche of fennel and mozzarella, and it went a little askew. Oh, the flavours worked well enough, I just failed to anticipate quite how much water is locked up in fresh fennel and inexpensive mozzarella.