Puchero is a soupy Spanish peasant stew. It’s also one of the earliest things I remember eating. My mother used to make it when I was growing up; a bastardised take, worked up from a half-remembered recipe with whatever she could find in 1980s & 90s Darlington.

You can find a lot of recipes for South American puchero, and the Spanish variants are multitudinous. Standard for those rustic dishes named after a stewpot a few hundred years ago. Elisabeth Luard tracks it back to Andalusia, making it as a simple broth of roasted chestnuts and whatever ham’s going spare. That sounds amazing, but it’s not what I remember. 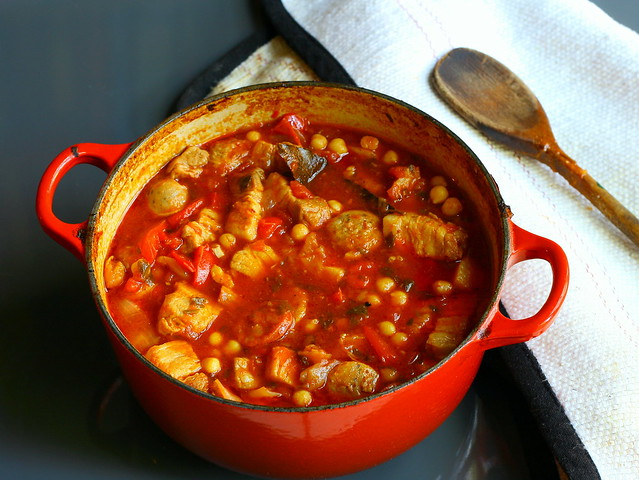 No, what I remember is a vivid broth of tender pork belly and plump chickpeas, flavoured through with scant chunks of chorizo. They were always the best bits – an unusual ingredient in that time and place, a treat to be hunted out in any bowlful. The sausages were a finer-grained Lincoln, sometimes a Cumberland, giving a plainer offset, but with the pepper adding interest.

I’ll wager we ate it with a good deal less meat per head than I’ve allocated here, and likely more carrots and chickpeas. I’ve amped up the indulgence, but you can dial it back down and go in hard on the veg. A little fatty pork goes a long way after all.

Anyway, here’s my best guess. I think my mum’s old recipe notebook is still floating around somewhere. It’d be fascinating to compare.