This isn’t quite Christmas leftovers, but the dish does have a similar backstory. It began as the cauliflower and cabbage terrine recipe in Stéphane Reynaud’s book Terrine, becoming a variant when I uncharacteristically decided to ditch the cabbage, and (somewhat more on-brand) threw cheese at it.

The full recipe is at the end. I didn’t get a picture, so you’ll have to trust me that it turns out rather well – creamy and fresh with leeks and spring onion to contrast. We served it as a Christmas starter with a light mustard sauce, and folks seemed to go for it.

But what to do with the half pint or so of surplus tasty goo?

A potted paté, and one I’ll certainly be doing again now it’s had a few tweaks.

END_OF_DOCUMENT_TOKEN_TO_BE_REPLACED

This is a new favourite. It doesn’t take too long, and it’s crispy, kinda rich, and implausibly moreish for what was once thought of as a deeply dull vegetable.

For years, the British have cooked cauliflower like it was the one vegetable they’d singled out as an example to the others. All flavour and structure boiled away, it was presented like a warning, lest anything else should get ideas above its station – say, providing vitamins, or tasting of something beyond anemically coloured water.

Lately, we’ve at least realised it doesn’t have to be that way. You can have fun with cauliflower, and one of the fun things you can do is to fry it crispy with just so much garlic.

Karaage is familiar to many as “Japanese fried chicken”, but it absolutely doesn’t have to be poultry, or even meat. I think the crux of it is a simple marinade before frying, and a light flour coating rather than dunking in batter. It’s a great appetiser or bar snack, and the idea to do it with cauliflower is shamelessly pinched from one of Cambridge’s street food vendors, the excellent Guerilla Kitchen.

Eat it there if you catch it on their rotation, but if not, well, you have to try this one.

END_OF_DOCUMENT_TOKEN_TO_BE_REPLACED

This was a quick Veguary lunch that got out of hand. The original idea was to start with a pakora recipe, and pack in the flavour of those big, heavy parmesan/anchovy/garlic meatballs from Kitchen Diaries. But the idea drifted a bit, and they came out lighter, more subtle. You get these wonderful little bursts of slightly astringent flavour where the cauliflower sears and the batter’s crispy, too.

Even if they hadn’t shaken out gentle, I’ll wager it would have worked – gram flour is basically magic.

This is a bit of an off the cuff one, and you may want to experiment with it.

END_OF_DOCUMENT_TOKEN_TO_BE_REPLACED

Like a gentler, more subtle Gorgonzola, Dolcelatte is one of those creamy-sharp soft blue cheeses, but with a bit of sweetness that lets it be a flavour enhancer as well as a big main kick.

Still though – lentils with cheese? Yeah, I know, but stay with me on this one. It’s all about the creamy savoury. 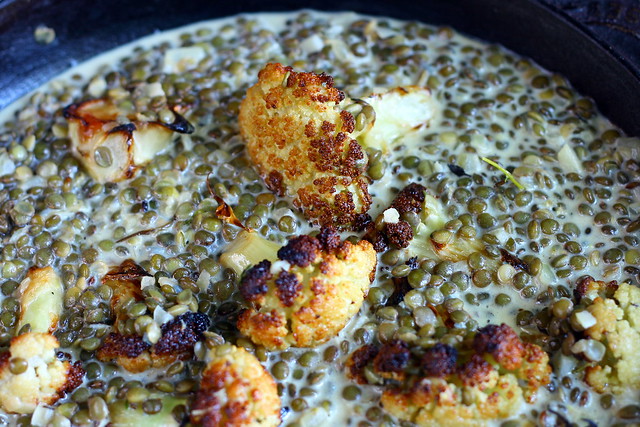 There are plenty of dairy-backed lentil dishes, often sausage casseroles or general piggy constructions. In fact, there’s a sensational one in Pork and Sons. But I wanted something that would be a big veggie umami fest, with a sharp hit to go through what can otherwise be a bit of a cloying set of flavours.

You could think of it as a kind of cockeyed dal makhani, but then you could do a lot of things.

END_OF_DOCUMENT_TOKEN_TO_BE_REPLACED

Ahh, cauliflower cheese. Few dishes more keenly evoke all that’s wrong with British food. It’s the dour culinary history of our grimy little island summed up as nursery slop. Cauliflower cheese belongs to the memory as a dull vegetable, over-boiled yet still acrid, squatting in a floury, tasteless sauce next to watery carrots and leathern beef.

It does not have to be this way. The bits are all good, and we can put them together better.

Felicity Cloake does cauliflower cheese justice in her Guardian column rather better than I will. She’s great, incidentally, and has a couple of books out. Anyway, you save cauliflower cheese by not murdering the cauliflower, and by putting  a bit of effort in with the sauce. It’s not hard, and the result is rich and tasty.

But it’s still a slightly odd side dish, and I wanted a main. What to do?

END_OF_DOCUMENT_TOKEN_TO_BE_REPLACED

Another recipe riffing on Jerusalem, I’m afraid. Near the beginning of the book, there’s a roasted cauliflower salad with handfuls of herbs and hazelnuts. It looks great, but I’m no huge fan of hazelnuts, and wanted something rather more substantial. So I dicked about with it:

This eats well enough either partly cooled after roasting or chilled later, and if you want to give it a kick, you can toss some harissa through it. It would also take chorizo if you felt meat was required.

END_OF_DOCUMENT_TOKEN_TO_BE_REPLACED

I fancied something simple and veggie last night, so a light curry seemed to be the thing.

In hindsight, I should have used a recipe, rather than faffing and experimenting. The dollop of yogurt at the end was a definite mistake, for instance, but the flavours shook out ok.

I fried an onion off with the florets of cauliflower, adding ginger and garlic, and chilli as the onion looked like it was heading for done. Then I threw in some spices, which is the point at which i really should have grabbed a notebook. I’;m fairly sure it was about a teaspoon each of cumin and mustard seeds, and tumeric; along with a pinch of fennel seeds, some smoked paprika, fenugreek, and cinnamon. Were I guessing, I’d say about half a teaspoon each of those last three.

Fry the spices, throw in a couple of chopped tomatoes, diced potato, and some stock, then simmer until broadly functional.

I decided to go with a splodge of yogurt to thicken slightly. It didn’t work, as you can see from the pictures.

It would have benefited from something on the side, I think, or perhaps the addition of spinach.

Oh well – lessons and what have you.