If you’re anything like me, you’ll have a hard time deciding which you’re more excited by: modernist architecture or duck confit. Squatting in the middle of Bloomsbury like the ziggurat of some concrete-fancying south american snake god – with more Saturday morning street food market, less blood sacrifice – the Brunswick Centre spoils us for both. 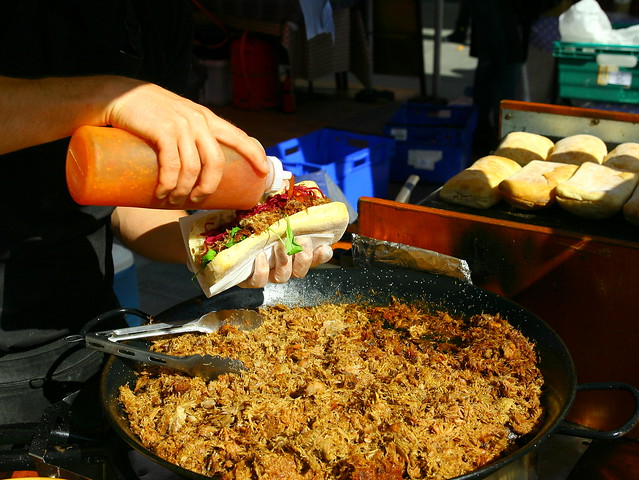 The Brunswick Centre is a ten minute walk from King’s Cross, or right outside Russell Square tube. It’s a brutal/modern delight. It’s got a decent cinema, a big Waitrose, there’s a dedicated gay bookshop down the road, and a genuinely great burger joint opposite. But it hasn’t historically been so hot for food. It’s chain town: Giraffe, Yo Sushi, Carluccio’s, you get the idea.

This doesn’t matter so much because you’re a short walk from the entirety of central fucking London. But sometimes I’m nearby and feeling lazy, and so the Saturday morning food market is a godsend. Sent, specifically, from Brutalist Quetzalcoatl, I’d imagine.

I’ve not eaten from all the stalls there by any means; they are various. Paella? Yep. Duck confit ciabatta? No problem. Fry-to-order gyoza? Why not. Wheelbarrow full of empanadas? Sorted. The prices are fair, and the general quality is high.

The star of the show is a wonderful single-concept sandwich: Adi’s Duck Confit. Adi will give you an enormous ciabatta full of slow cooked duck, rocket, red cabbage, and plum sauce for a fiver. This is bloody amazing.

I couldn’t find a website, so there’s nothing to link to, which means you’ll just have to go and try it.

This is a brilliant lunch. Duck and red cabbage is an obvious combination, and the sharp/sweet of the plum sauce goes right through the fat. It’s got body, it’s got richness, it’s got depth and balance. And it’s enormous and costs five pounds. I think I’ve eaten three of these fuckers now, and it’s a struggle to go to the other stalls. The duck is succulent and mouth-melty tender, and the cabbage is just-cooked for a bit of crunch. Delicious.

In at a close second from what I’ve tried is another stall with no web presence. Cambridge’s street food is all social media all the time, but I guess these guys have the footfall not to need it. In any case, I think it’s called Taste of Portugal, and if it isn’t, it’s the Portuguese one outside Waitrose.

They had three simmering pans of stew the other week, and will happily mix and match for you. We saw pan-fried curried cod, chicken piri piri, and a rich tomatoey chorizo dish, brimming with smoky paprika.

It’s served in preposterously generous tubs, on a bed of rice or couscous, with some salad you just don’t need. The piri piri is spicy without overpowering, and the marinade clings tight to the chicken, bringing some fruit notes in with the zing. Little carrots vary the texture and keep it juicy.

The cod is far gentler, spices and herbs in the background. It’s dry in a sauce sense, but the fish and potatoes were beautifully moist and subtle, with black olives mixing up the texture a bit. This will amply set you up for the day; or maybe a nap.

Also both tasty and generous: the MedPaella stand. It’s another does-what-it-says-on-the-tin type deal: they have two enormous pans, and in them they cook paella. One veggie, one not, both tasty. The colour is vivid, the rice retains bite, there’s plenty of veg in both, and they’ve picked a solid, tasty chorizo for the carnivore option.

The smell is wonderful, making this a hard stall to walk past.

In fact, you could be quite forgiven for not walking past. Maybe get the confit for lunch, but some paella to reheat for dinner? It keeps well enough for that to hold.

The only other stall I’ve tried so far is Juzu Takoyaki. This is an interesting one.

If you’ve watched much anime, you’ll be familiar with the odd protagonist stuffing their face with these little pancake-ish takoyaki balls. They’re like a miniaturized okonomiyaki with octopus where the cabbage would be.

For those for whom that’s (quite reasonably) no fucking help at all: it’s a ball of filling, often octopus, encased in a sticky doughy batter, and fried in these cute little dimpled griddle things. Then ruined/garnished (your tastes may vary) with mayonnaise and a selection of sauces.

This was the dish I enjoyed the least, but I honestly don’t think it was bad food.

By the time we got them home, they’d cooled and picked up a slightly claggy texture. It wasn’t a long walk, but it was enough. You could tell what was meant to happen: just-so octopus, crisp outer batter, yielding gooey middle. Wolf these down on the spot, and I reckon it’s a good time. But the tiny tentacular bastards do not travel.

The market has plenty more to eat your way round. There are I think 3 cake stalls, at least one of which is excellent – the place next to Adi’s Confit does these amazing moist, light, lemon rosemary cakes. There’s a steak sandwich place, an Argentine empanada vendor that looks amazing, a dude who fries gyoza for you, polish sausages, a falafel stand with these buckets of bright, vivid pickles, and, well, just an absolute load of cool stuff.

Yes, London is full of good food. Yes, street food is heading towards the peak of the gastro hype cycle. Yes, it’s also a function of property market distortions. But its exponents pushing food outside the Brunswick Centre on Saturday lunchtimes are doing a cracking job, and there’s some damn tasty stuff for lunch.

Oh there was a pretty cool dog, too. 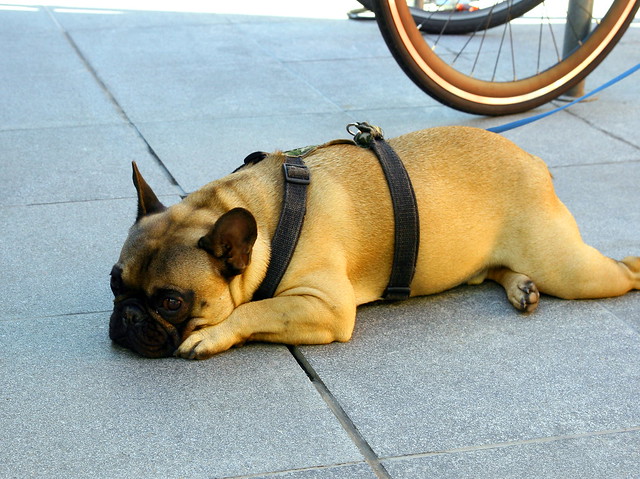 (I don’t think he’s there every Saturday)