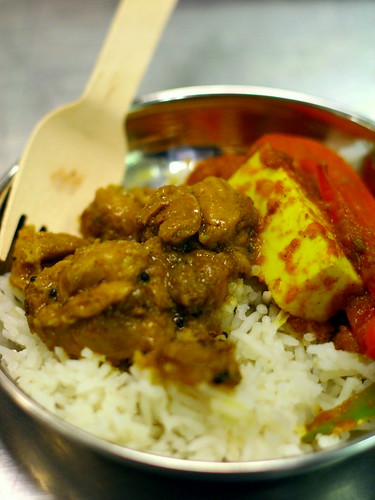 Inder’s Kitchen is – for my money – the best place to eat Indian food in Cambridge. Let’s just get that out of the way.

They’re great. They’ve been going for about five years, and I remember being delighted when they started – it felt fresh to have a more high-end, home cooking inspired take on Indian food available, something to offset the curry house archetype.

Now, I love a classic Anglo-Indian cliche curry, but they’re not exactly magical feats of foregrounding single interesting flavours. Inder’s hits that spot – the food isn’t greasy, it tastes fresh and intricate, and it goes beyond (while sometimes including) the korma/dhansak/vindaloo etc standards.

Despite only doing takeaway, Inder’s has always tried to diversify a bit – they’ve had a food van, tried chilled-to-reheat and frozen, and started making sauces and chutneys. And that’s how I found myself in their industrial unit kitchen, trying their latest venture: a set of curry kits to make at home.

When I got the invite, I was half expecting stir-in sauces, a classier Patak’s maybe. I’ll confess: I wasn’t hopeful. Full-on ready meals didn’t quite seem their style, but I was a little nervous. The curry kits, then, were a bit of a surprise. A good surprise.

In the box you get a series of sachets. They’re still in development, so ours were ziploc bags. The packaging is a work in progress, too. Each sachet is essentially a batched up stage of curry making. So for the Bhuna you had a lightly spiced onion mix, a spice mix, ginger and onion paste, and chilli to add to taste, along with a bit of chopped coriander. Nobody would miss that if they skipped it. The Jalfrezi was similar, with some tomato in one of the mixes. You just add the meat or veg you fancy, and top up with water to finish, or a tin of tomatoes in the case of the Rogan Josh.

Inder explained that the idea was to be able to make a fresh, home style curry in about 15 minutes, without all the chopping and grinding time you sink into preparing those pastes and mixes in a domestic kitchen. She then went on to demonstrate precisely that.

In a charming nothing-up-my-sleeves touch, she’d brought in her own pots and pans, which looked practically miniature on their giant commercial gas range. True to form though, the curries took very little time to prepare, and while I’m not going to claim they were as good as you’d usually order from Inder’s, I wouldn’t be typing this if I hadn’t thought they were onto something here.

The Bhuna had a really good savoury spice balance, shot through with little black mustard seeds, and plenty of curry leaf and cumin. Damn, curry leaves are the best – herby/savoury, just slightly bitter, and so aromatic. They deepen everything out, and they’re working really well here.

The Jalfrezi was made with paneer and green peppers, and the sauce had that classic hot/sour edge with a little chilli kick. That’s optional of course – one of the things I suspect may make the kits appealing is the ability to regulate the chilli hit. I’d cook the peppers a bit more myself; that’s something I’m wiling to throw five extra minutes at.

Inder prepared a couple of curries on the night, and we were all packed off with a kit of our choice to try at home and give feedback. It’s not often market research gives you homework, but I was keen to do mine. For the first tranche, they’re going with curry house classics: Jalfrezi, Bhuna, Rogan Josh, and Korma, with hopes to expand to their more exciting selection. I took a Bhuna kit and tried it out the next day.

So how did it go?

First up, they’re doing great for consistency. The instructions were clear and concise, and following them I ended up with something damn close to identical to Tuesday’s taster. A deep, savoury sauce, onion-thickened and clinging to tender chicken thighs. It needed a touch more reducing time than specified, so I’d maybe go under on the water, but otherwise I can’t fault the guidelines.

Making a curry at home is all about layering up the flavours, and getting spices cooked just so. The spiced onion paste smelled delicious as it sizzled, and the dry spices gave you just that pungent whoosh as they went over the meat. This was credibly like doing it yourself, and because it’s Inder’s Kitchen, I trusted that the end result would be something rather good.

That trust will be an interesting thing out in the market. I Don’t really buy ready meals, so it nudged me over the doubt. But what will customers make of the curry kits out in the wild? More hassle than a stir-in, but much closer to actual cooking. Will they have hit the (kinda mythical) Betty Crocker sweet spot, or will the convenience shoppers be deterred?

Well, I guess that’s why they’re asking for feedback from their customers, and I’m certainly positive about the product, even though it’s something in a category I just don’t buy. But as a slightly unusual thing, it may have a tough job on the shelves. Certainly, to avoid confusion, they’ll need to be super clear that there’s no meat included. This means packaging will probably count for a lot, and the test boxes are pretty generic. Again, that could go either way – reassurance to the category customer who needs convincing, or effacing the distinctive attributes and looking low quality.

They get points for well-written instructions on the flip side, mind.

The mood in the room was incredibly upbeat about the kits (well, except the packaging – nobody liked that), with a few folks saying it would make them feel less guilty about buying premade, or more likely to make curry. I guess that’s what they’re shooting for, and if they can persist the quality of what’s in the box then I reckon they’re onto a winner.

I don’t know how many more iterations they have to go through, or when and where they’ll be available when they’re ready, but I would say keep an eye out for the Inder’s Kitchen “Art of Curry” kits. From chatting at the tasting, I think they’re aiming to start small and local, so don’t go looking in Waitrose or Tesco quite yet, but I’ll be intrigued to see how these go.